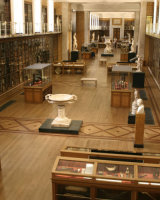 Enlightenment Gallery of the British Museum will instantly transfer you to the world 250 years ago, allowing you to breath the atmosphere of the museum when it’s first collection was open to the public.
Being a regular visitor of the British Museum, it somehow happened that I never visited the Enlightenment Gallery opened in the fully refurbished King’s Library in 2003 to celebrate museum’s 250th anniversary.

To my astonishment, this exhibition calls to reveals the story of how the British Museum was founded and operated during it’s first years. It carefully restores the atmosphere of the first exposition shown to the public. The British Museum was founded in 1753 following the will of Sir Hans Sloane, English scientist, physician, naturalist and collector. His role is society was widely important, several streets and places were given his name, including Sloan Square in Chelsea. His enormous collection of books, antiques, pieces of flora and fauna by the time of his death consisted of more than 71,000 items; according to his will he had given the whole collection to the states under the condition that it will become available for the public.

This condition became a sticking point for several decades.

Initially there were 2-3 groups of 5 people scheduled for the same hour to conduct a group tour, which allowed to show the collection to 60-75 people daily. For a long time 5 people group was considered the maximum for the collection safety. And of course, there was a waiting list and ‘black’ market for tickets.

From testimonies of that time we can find out that those visits were very short and museum personnel in many cases cared mainly about the business and could not say much about the collection, nor that they had had some time to do this, but only to rush through the rooms.

Under this regime (with some variations in the number of groups and number of people in the group) the museum operated for half a century until 1810 when all restrictions were removed and the access to the museum became truly free.

The plethora of the diverse objects in the Enlightenment Gallery let us skim back in time and see what people thought of the world in 18-19 centuries and how our understanding of the world developed and changed during last 250 years.


Images:
© 2017 Trustees of the British Museum
http://www.britishmuseum.org/about_us/services/film_and_radio/locations/enlightenment_gallery.aspx
On Kabakov's 'Labyrinth (My Mother's Album)'
Changes in the role of a viewer throughout XIX-XX century by the example of works of Georges Seurat and Yayoi Kusama
Next
Previous